Capital Commercial Vehicle Centre has a solution for fleets of all sizes. Whether you have 1 vehicle or 1000, you need dedication and expertise to keep them on the road. We’ll take care of your vehicle fleet, big or small, so you can focus on your business.

Why Choose Capital For Your Commercial & Fleet Services?

As a Capital Commercial client, you get immediate access to an inventory of 1,000+ vehicles, award-winning service, and the largest parts inventory in Saskatchewan. We can help you find the commercial vehicle or fleet of vehicles to make your business run smoothly. Whether it’s a small car, SUV, light duty truck, heavy duty pickup truck, transit van, or even medium duty trucks like the powerful Ford F-650, we will get you into the vehicle(s) you need at prices your business can afford.

Ford’s one-of-a-kind Business Preferred Network program is perfect for any small business operator, entrepreneur or small commercial company whose owner’s value their time. The Ford Super Duty to the Focus, Ford’s lineup has something for you and your business.

Across the lineup, GMC vehicles are truly professional-grade. From the flexible Terrain to the workhorse Sierra 3500 HD, GMC vehicles put performance and reliability above everything else. You work hard; put your trust in vehicles built to work hard for you. 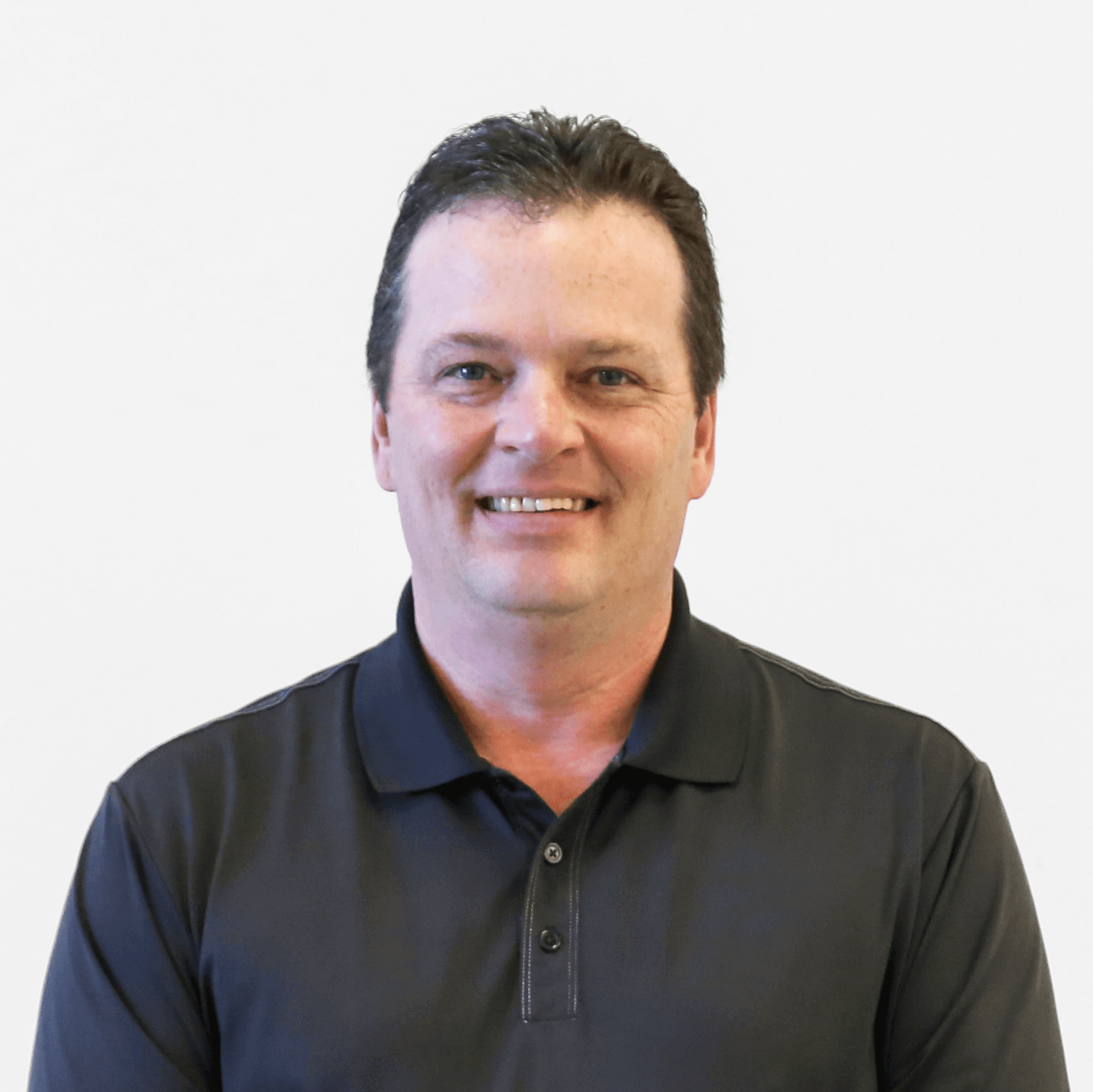 I’m Reid Robertson. I was born and raised in Regina. I am married with two kids with whom all of us are involved in hockey and ringette. We continue to make Regina our home and roots planted for our kids as well. I started selling Ford products back in 1995 and quickly decided that this was my career and my future as the Ford Truck became a passion of mine. In 2005, I was offered and accepted the position of Fleet Manager for Capital Ford Lincoln and since then have been awarded several Summit Awards for performance in fleet sales from Ford of Canada. It is a pleasure to come to work everyday to meet all my present and future clients of Capital Ford! 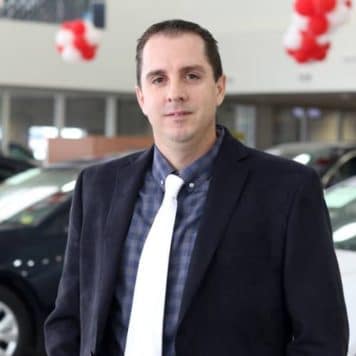 I’ve been with the Capital GMC for over 20 years, two of which were spent as a Product Specialist. For two years, I was a silver member of the Sales Marketing Guild until I became the Fleet Manager at Capital GMC. Since then, I’ve been a proud member of the GM Fleet Managers Gold Club for 17 years. I enjoy coaching hockey, playing golf, and watching the Riders. 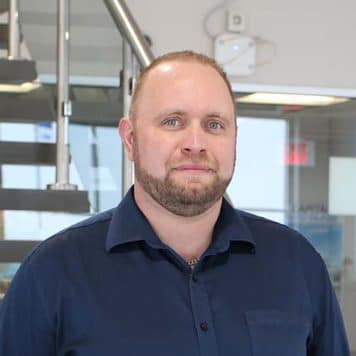 Corey Hamilton is excited to work with the Capital Automotive Group as a Commercial Service Representative at the Commercial Vehicle Center. He was born and raised in Kindersley, Saskatchewan where he found his passion for working on all sorts of equipment and vehicles at his family owned Agricultural Dealership. After getting his Briggs and Stratton Small Engine Certificate at the age of 13, he has been holding a wrench ever since.

Working many positions in the agricultural and oil industry around Kindersley, Corey decided to make a change and move to Regina where he dipped his toes in the water at a local boat shop. Corey soon realized the seasonal business wasn’t for him and made the move back into the equipment industry. Starting off in the parts department at a busy truck upfitting shop, he was soon promoted to Territory Manager for all of Saskatchewan. Corey looked after his customers throughout the province for 8+ years. When the oil industry slowed down, Corey moved back into the shop at a Ford Dealership repairing the vehicles he had been selling for 8 years previous.Corey understands the importance of communication between the shop, the service department and the customer – whose vehicle being down costs them money. Corey is excited to be able to work with all three areas to build strong lasting relationships.

Outside of work, Corey enjoys spending time with his son. This includes but is not limited to camping, bicycling, playing baseball and golfing. Corey coaches his son’s baseball team in the summer and has enjoyed doing so for the past 4 years. In the winter, Corey enjoys lots of snow, so he can ride his snowmobile.

Corey looks forward to building new relationships and cultivating old relationships with customers. Knowing that keeping their fleet on the road is what makes them money! 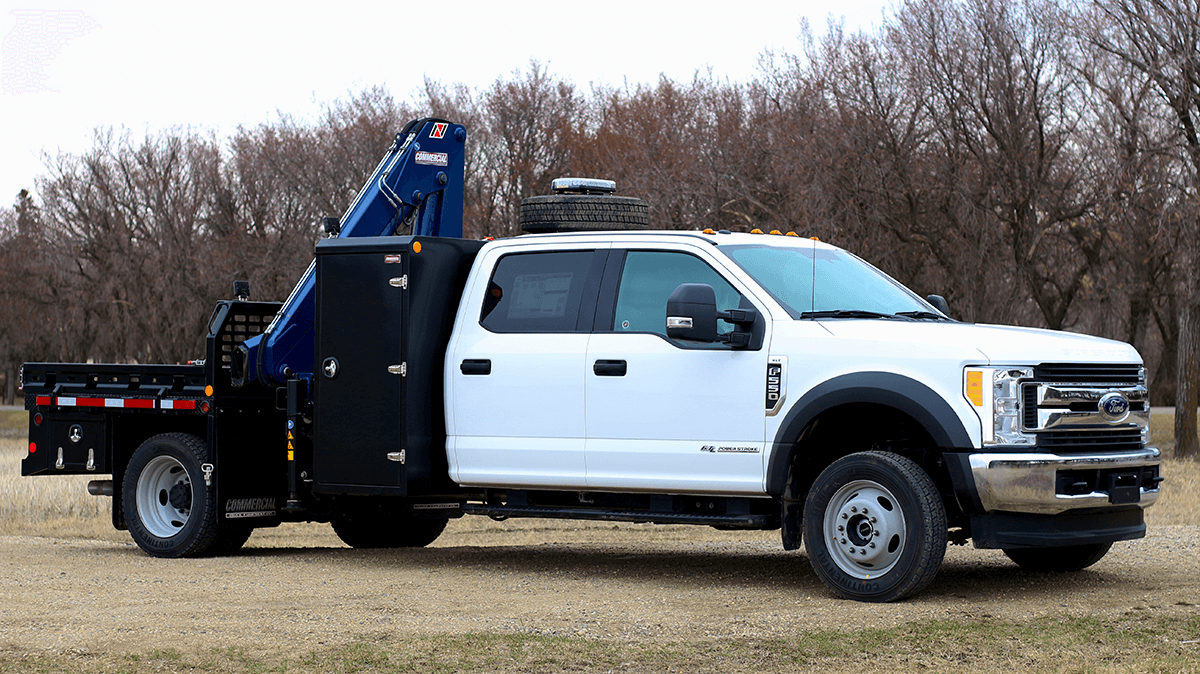 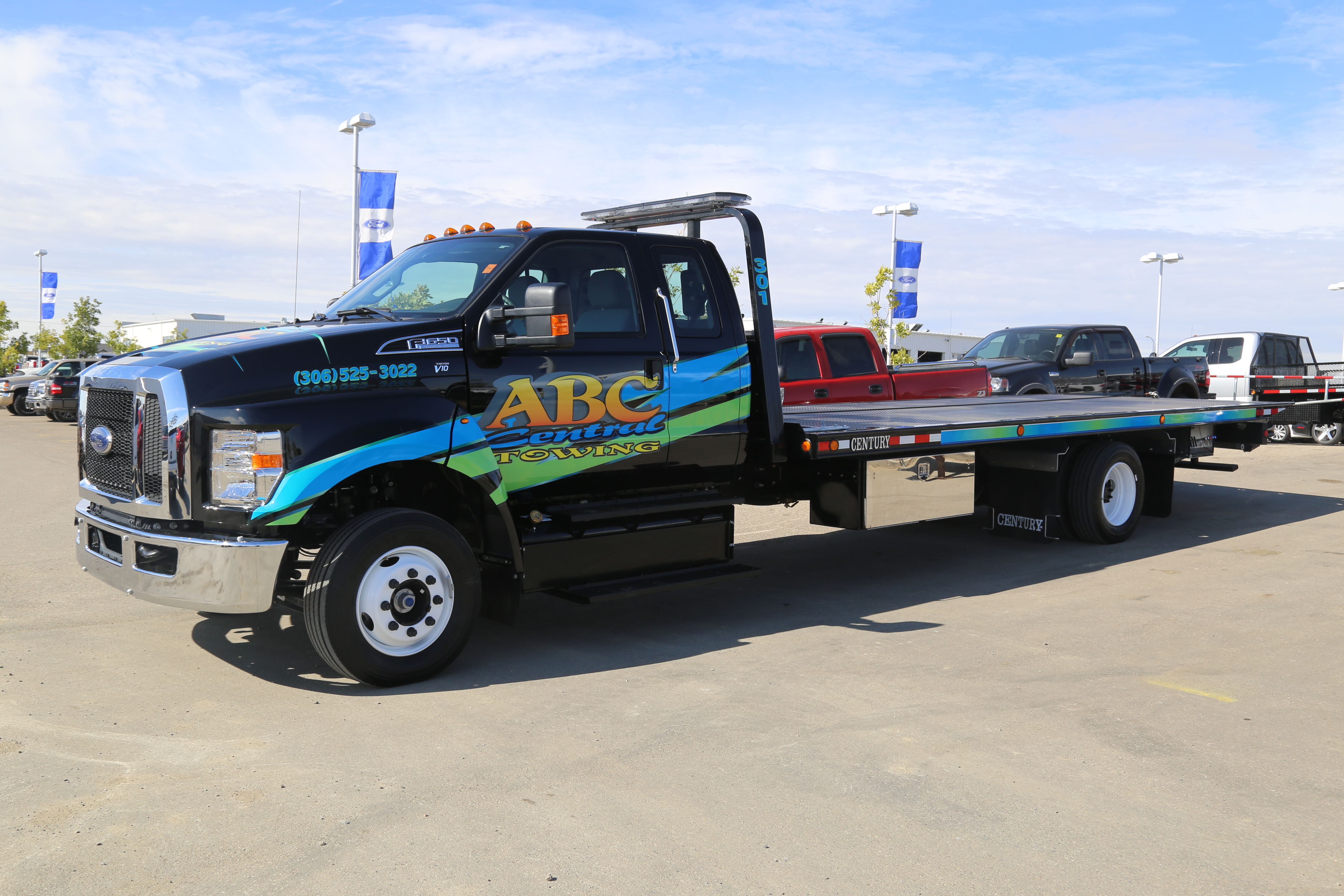 Nearly every commercial vehicle we sell includes some premium accessories and upgrades. We can supply and expertly install almost anything, from original OEM parts to the unique aftermarket options that suit your business needs. We have many skilled technicians with expertise and experience in all areas of upfitting and accessory installation. Our size and volume give us some of the strongest purchasing power in Canada. Ultimately, that translates to savings for our customers.

Because the electrical architecture of new vehicles is very complex, it can be difficult to install aftermarket accessories.  Our electrical technicians have the knowledge and expertise to install almost any electrical component:

Rhino Extreme Liner bonds to almost everything and is proven to protect against impacts, abrasion, corrosion, chemicals, rust, and weather wear. On top of that, Rhino reduces noise from vibrations and impacts. Rhino also provides a slip-resistant box coating for the hardworking truck and its owner.

Xpel Paint Protection is always on guard, protecting vehicles from stone chips, bird droppings, and other environmental contaminants. With exceptional stain resistance and protection from both airborne hazards and physical debris, Xpel is the obvious choice for paint shielding.

We offer a host of suspension options like levelling kits, lift kits, lowering packages, helper springs, and full airbag solutions. It is critical that these components be properly chosen and installed. No one lifts more trucks than we do. We have specially trained technicians who only use the best parts and the latest installation technology.

We can design, produce, and install any vinyl decal from corporate logos and unit numbers to full vehicle wraps. Whatever your vinyl needs, our installation experts have got you covered!

In addition to traditional accessories, our technicians are certified to install rollover protection cages, positive air shut-off equipment, performance upgrades, and other gear. These are services that other shops simply can’t offer!

Each commercial and fleet customer has specific demands for their vehicles. As proven experts in the Canadian automotive industry, we’ll listen to you and help you meet the demands of your business. We’ll help you choose between new and pre-owned vehicles. We’ll also help you figure out the best payment strategy – whether it’s leasing, financing, or purchasing outright with no repayment contract. Providing you with all the details, and an expert recommendation, means you get exactly what you need for your business.

In order to make a decision about your fleet, you need to know where you stand. We will perform a complete initial assessment, appraisal, and report based on each individual vehicle in your fleet. After that, we’ll annually provide the current market value of each asset. Every dollar saved in your annual expenditure is a direct addition to your bottom line. 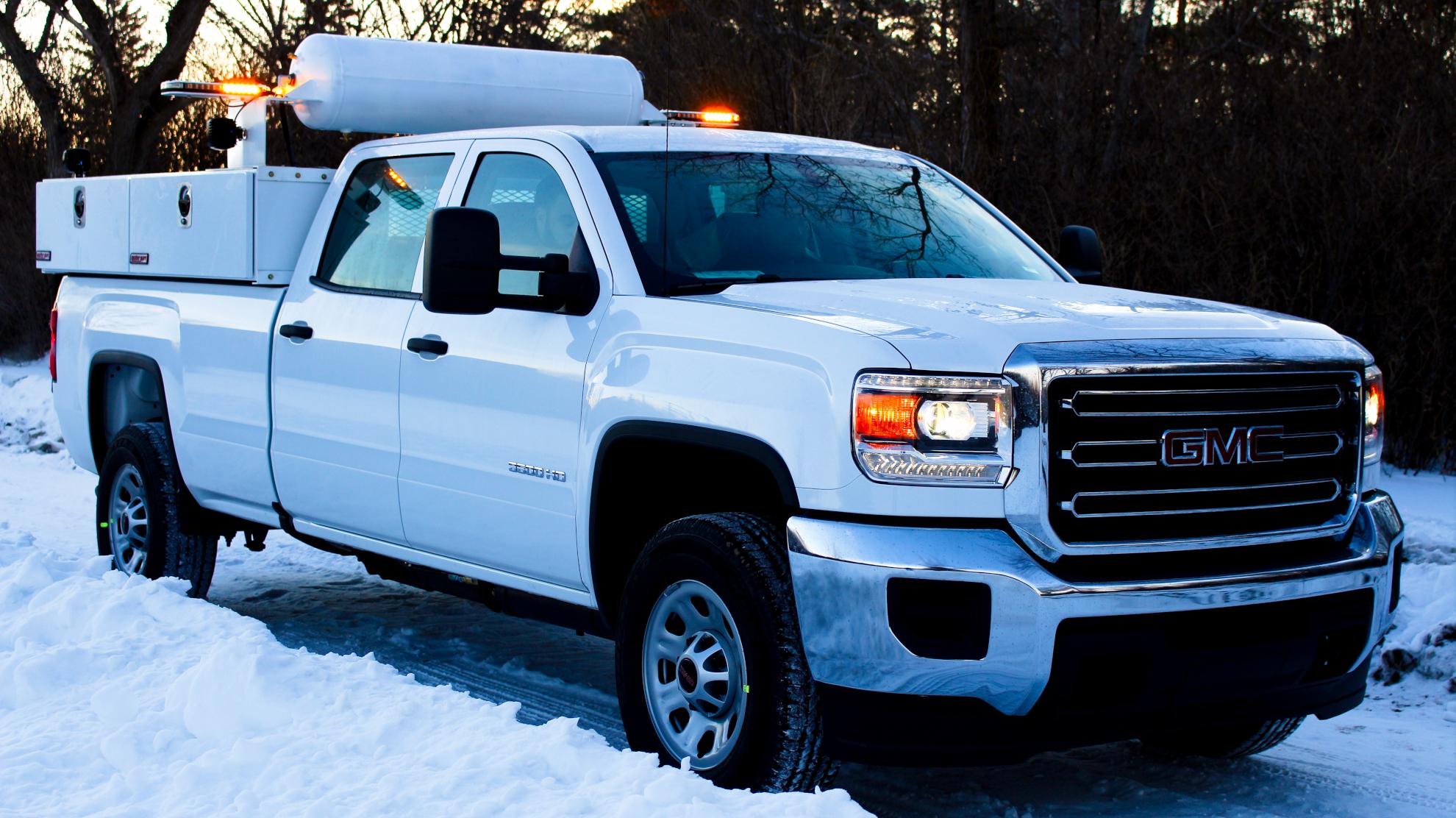 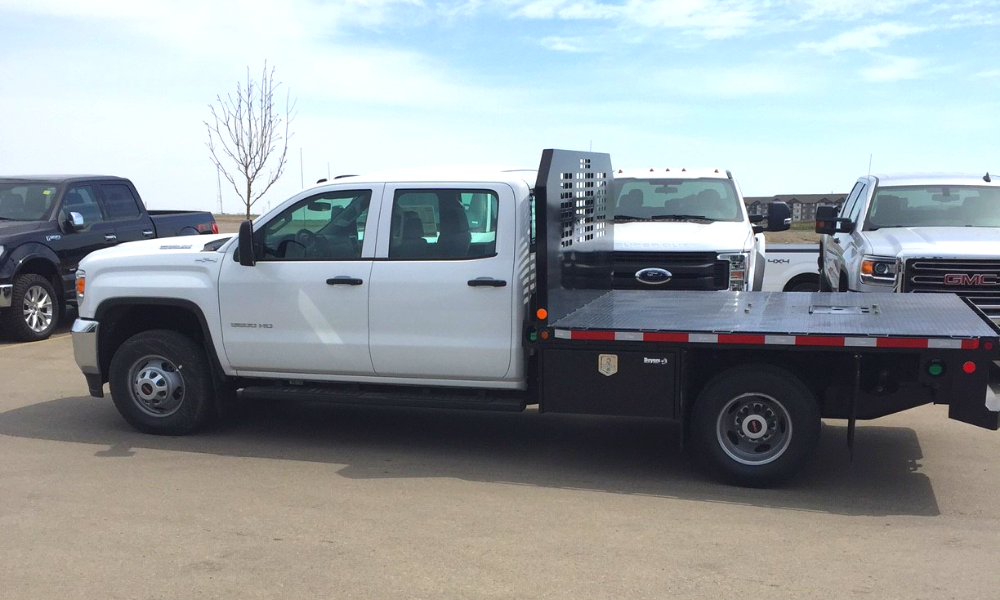 Currently, the Capital Automotive Group specializes in the new vehicle brands Ford, Lincoln, GMC, Buick, and Cadillac. We have two primary dealerships in Regina. With these locations being some of the largest in the country, you have immediate access to an inventory of over 1,000 vehicles. Include our extensive network of dealer partners, and the number grows. The bottom line for commercial customers is that they always get the vehicles they need.

Although our access to new vehicle inventory is unmatched in Canada, we also facilitate direct factory orders. If you need models with precise specifications, we’ll help you order them directly from the manufacturer. Once ordered, we’ll schedule delivery dates to accommodate your demanding schedule.

You’ll have access to the largest pre-owned inventory in the country. Our vehicles are on the ground and ready for delivery. Given the size of our operation, our supplier network, and our purchasing power, we can source any vehicle that you need. From subcompact cars to 7500 series heavy duty pickup trucks, we have the vehicle solutions you need. All of our pre-owned vehicles are fully inspected, reconditioned, serviced, and backed with warranty.

We will work with you directly on each and every purchase to maximize the financial efficiency of each asset. We work with all primary financial institutions and also have our own in-house finance and lease solutions through Capital Finance. We are able to offer unique and creative solutions that are tailored to your specific needs, and not available through traditional lending. These options include flexibility on lease residuals, inclusion of modifications, unique payment terms, and more.

Every commercial vehicle we sell has a minimum warranty package and an expiration date or kilometre restriction. Although we are confident in our products, the average vehicle currently costs around $300 per hour in the repair shop. We offer a number of options for extending the warranty coverage of any vehicle, which can prove a great investment for business owners. You can maintain a consistent budget per VIN and eliminate unexpected repair expenses.

Every vehicle requires a certain amount of maintenance in order to operate at its peak efficiency and to maximize its usable life expectancy. Fortunately, we offer all-inclusive solutions that can be structured into the initial purchase or payment arrangements that cover all such maintenance items. These plans ensure a consistent maintenance regimen is followed while eliminating additional unexpected expenses to your fleet.

Our available tire protection plans are priced lower than the average cost of one tire and cover all tire repairs and replacement due to impact or puncture failures for the entire plan terms.

We can supply any Work-Ready vehicle from compact cars, cargo vans, and all pickup trucks up to 7500 series. Any make or model. New or used, with specifications to match your needs. We take care of everything from sourcing premium modifications and accessories to the required inspections. We produce and install corporate decals and even make sure your vehicles have necessary safety and first aid kits. You have work to do and we provide the vehicles ready to work for you. 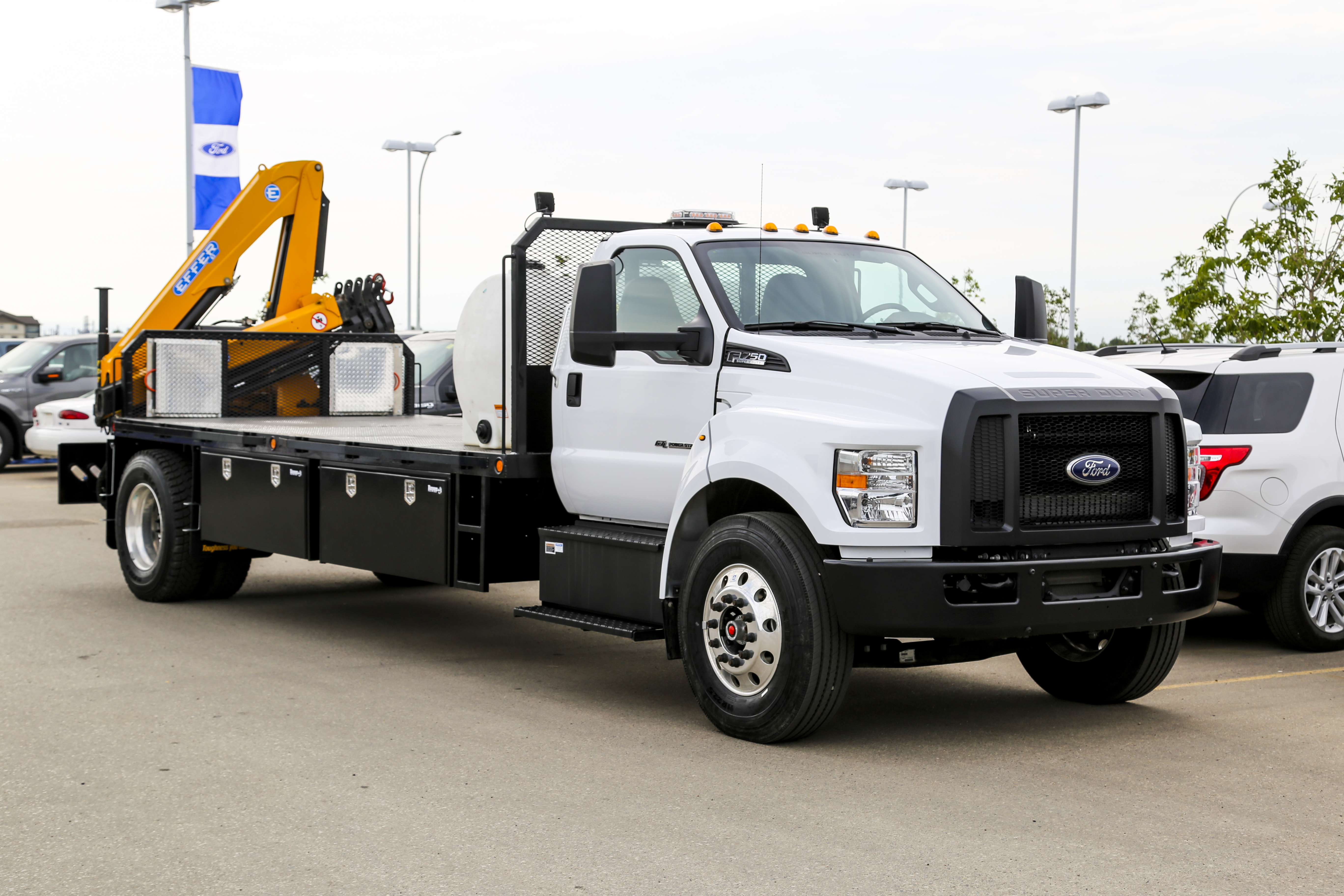 We don’t just want to sell you vehicles. We want to work with you to achieve the most efficient utilization of your business expenses – from start to finish. We are confident that our expertise in all areas of this industry will save you money.